Trade with Cards on Cards

Recently Cards on Cards and I worked out a trade, and here are some highlights of what was sent to me.
8 Jeters 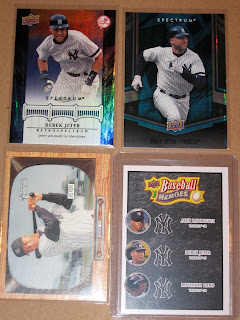 The Derek Jeter Retrospectrum card is my favorite. It is the first card that I have of this 100 card set, which will prove to be a toughy to collect.
There are soo many serial numbered cards of jeter from the 08 heroes set, so it's nice to knock this black version off the list of ones that I need to locate.
Some Ichiros and other players that I collect 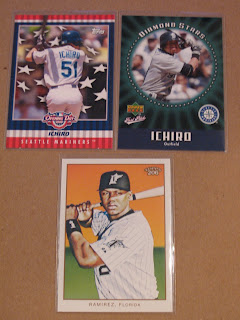 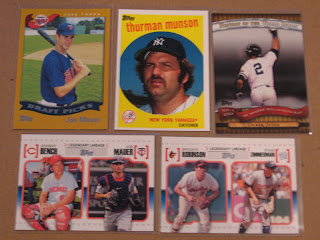 I'm pretty sure that the list of inserts from this set for the players that I collect is at least 4 times as long as the list of base cards for those players. Oh well, I like the variety.
20 Yankees Stadium Legacy cards 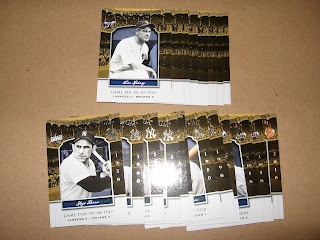 Sweet. Now my collection of these is up to 37; only SEVERAL THOUSAND more till I have the full set!!! If anyone else has these and is aching to offload them definitely talk to me.
Lou Gehrig Chrome Refractor 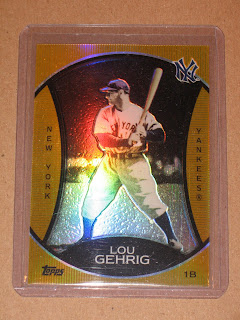 I'm trying for this set as well. It really put a damper on my hopes the other day when I realized that there was a separate checklist for the gold ones. Originally I thought that series 1 had a 10 card checklist of the platinumrefractors and series 2 had a ten card checklist of gold refractors, but apparently not because I have a mickey mantle platinum one that is #PC16. Does anyone know how this set is compiled? Are there 10 platinum and 10 gold for both series 1 and 2?
Thanks for the trade Madding. The cards are great additions to my collections.
Posted by NMCLax24 at 8:59 AM