I picked up some package materials for trade packages that I need to send out, and I happened to see that they had some 09 Chrome. Of course, how could I say no to some chrome. I got four packs. Here they are:
Pack1: 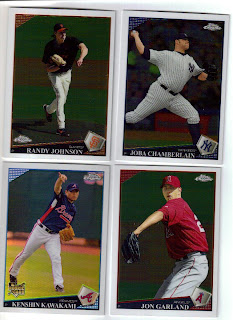 #56 Randy Johnson
#138 Joba Chamberlain
#195 Kenshin Kawakami (RF)
#57 Jon Garland
It's a good pack when I pull a Yankee that I like. Can't forget about the freshly retired Randy Johnson.
Pack2: 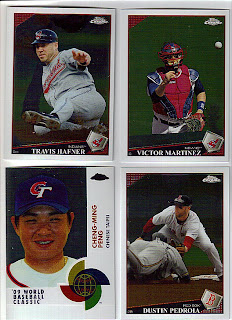 #137 Travis Hafner
#104 Victor Martinez
#W38 Cheng-Ming Peng (WBC)
#97 Dustin Pedroia
I am a chrome Hafner magnet. In the span of a booster and 8 some-odd packs I've pulled 3 regular Hafners and 1 XF. Apparently there were no retakes allowed for the WBC photo shoot cause some of these guys pics are laughable.
Pack3: 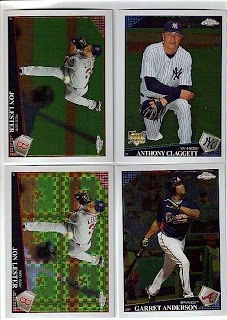 #6 Jon Lester
#215 Anthony Claggett
#6 Jon Lester (XF)
#147 Garret Anderson
Two Lesters in one pack! The odds of that have got to be awfully slim. I like the XF better than the RF. This guy Claggett keeps coming up too. I have 2 normal and an RF of him, which works out fine cause he's a Yank. Anyone know if he's any good?
Pack4: 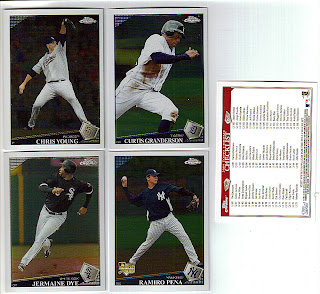 #30 Chris Young
#120 Curtis Granderson
#18 Jermaine Dye (RF)
#205 Ramiro Pena
Check List 1
Sweet Ramiro! I finally got Pena. I'm glad that they don't consider the CL one of your four cards for the pack. It's hard to tell but the Dye is in fact a RF.
The Pena and the Chamberlain are mine but everything else is fair game for trade.
Posted by NMCLax24 at 11:59 AM