Recently I received a package from Dinged Corners. I had expressed an interest in a couple cards from the 08 Moments and Milestones set that had been posted as being available for trade. Little did I expect this entire package! Here's what was sent my way: 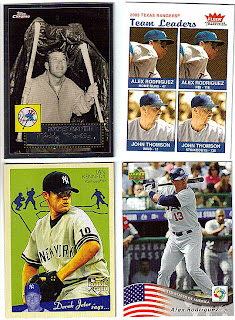 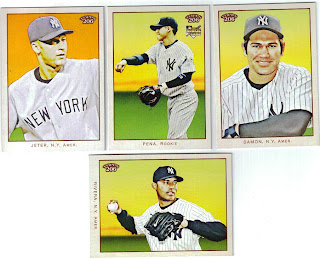 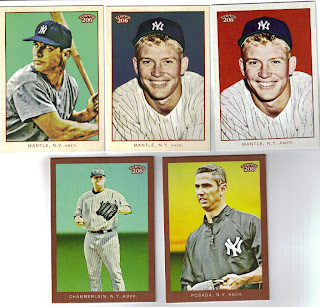 CL1 Mickey Mantle
CL2 Mickey Mantle
NNo Mickey Mantle (SP)
#73 Joba Chamberlain (Bronze Border)
#184 Jorge Posada (Bronze Border)
I actually like the T206 set, I think I will try to collect the base cards for the players that I normally collect, and maybe some SPs.
Contrary to what I've heard from a lot of people, I enjoy this set. Sure Topps employed somewhat of a manipulative rarity system, but as someone who collects a lot of players in this set, it is really nice way of looking at their achievements.

I also got a Mickey, a Cano, and a Pettitte.
I really like the look of this set but the arrangement can certainly be frustrating to try to collect. Either way, I'm certainly happy to have the cards.

Then there are these Jeters. These are not confusing at all. I actually have 2 of the ones from this countdown. I think the design on these is great. The affect of the gold strips behind him give the feeling of triumph, which I like. Even though a random sampling from the entire set may look disjointed, once you put several cards of the same countdown together, they look great.
Last but not least: 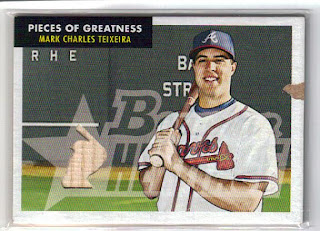 A Mark Teixeira Bowman Heritage relic
It came with a note explaining the the scrape on the right edge as damage that was there when pulled from the pack :( Come on Bowman! People pay good money and hope to pull nice stuff, not damaged product. However, I can still appreciate it. If you hold it with your finger over the damaged part, it's pretty sweet!
Thank you Dinged Corners for the generosity of the package. I hope you enjoy what I've sent in return.
Posted by NMCLax24 at 7:28 PM