I kinda like this set but these are quite possibly the thinnest packs I have ever felt! Four cards of relatively thin stock, one of which isn't even a full size card. But hey, the turn outs after opening 5 packs haven't been too bad. 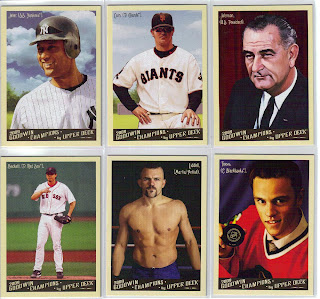 2 Derek Jeter
12 Matt Cain
36 Lyndon Johnson
67 Josh Beckett
70 Chuck Liddell
90 Jonathan Toews
My man Jeter; it's a good card of him. Jonathan Toews, who's he? I don't follow hockey. That's awesome that UFC fighters are starting to appear in these Baseball+ type sets. I love UFC and Chuck Liddell was pretty darn exciting to watch for the longest time. Last night I watched the Couture vs. Vera fight on Spike, Couture had me scared for a while but he pulled it off. He really is Capt. America, 46 and still going strong! Anyway... 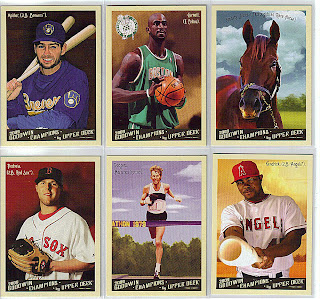 96 Paul Molitor
111 Kevin Garnett
115 Smarty Jones
121 Dustin Pedroia
128 Bill Rodgers
159 Howie Kendrick
So far the ratio of baseball vs. "other" seems to be 1/2 and 1/2. Ehh I personally like to pull mostly baseball out of my baseball card packs, o well.
Now for the Minis: 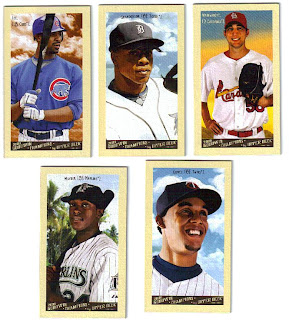 27 Derek Lee
102 Curtis Granderson
218 Adam Wainwright
234 Carmeron Maybin
248 Carlos Gomez
I don't normally collect Carlos Gomez, but I might hold on to this card, I like it.
And my favorite card from the packs: 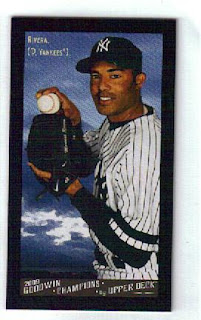 222 Mariano Rivera (Mini Black Border w/ Gypsy Queen Background)
Ok, so the list of attributes is much longer than the card is rare, but it is Mo after all! A great addition to my Mo collection.
Overall, the players in this set look nice. Great art or art-esque look to it. They look like paintings but I believe that they are pictures that have a painted effect digitally applied to them. The backgrounds are so-so. Definitely worth the $2.25 I paid for each pack.
I've heard mixed reviews on this set, what does everyone think?
Posted by NMCLax24 at 9:35 AM