I realize I totally missed the boat when it comes to posting 2010 Ginter stuff, but I couldn't resist the opportunity to post some sweet Ginter Minis
I decided that I am going to collect the mini insert sets for Ginter this time around, and a couple ebay wins has gotten me pretty far into the collection.
First: Some A&G Back minis, and a Lone Black Border 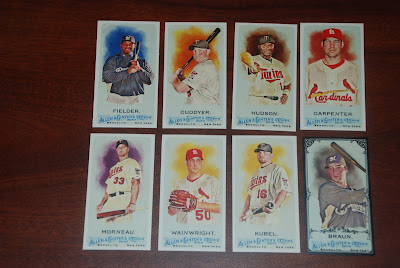 #4 Prince Fielder (A&G)
#61 Michael Cuddyer (A&G)
#66 Orlando Hudson (A&G)
#182 Chris Carpenter (A&G)
#191 Justin Morneau (A&G)
#219 Adam Wainwright (A&G)
#223 Jason Kubel (A&G)
#3 Ryan Braun (Blck Border)
I realize there was a shortage of regular back minis this year. I'm not sure why topps thought it a good idea to make regular minis one of the more difficult of the minis to pull from a pack. I had bought close to 20 packs and only managed to get 4 regular minis. Of course this made collecting the inserts easier but drove up prices on ebay for the regulars. Oh well, I may eventually buy up some of the standard minis at least of players I collect.
World's Wordsmiths and National Animals 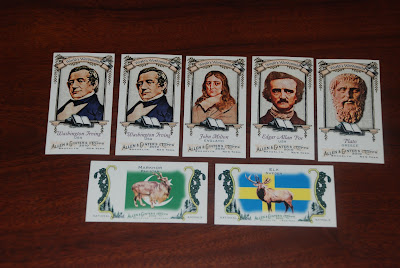 WGWS:
#3 Washington Irving (x2)
#8 John Milton
#10 Edgar Allen Poe
#14 Plato
NA:
#12 Markhor
#23 Elk
The national animals set is one that I find to be really boring. Anyone else feel the same?
Monsters of The Mesozoic 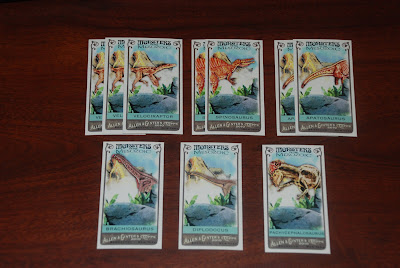 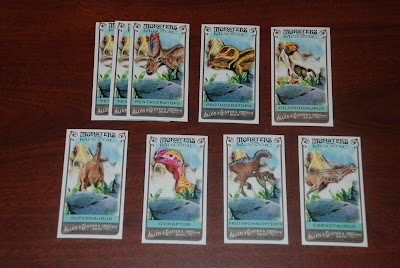 #14 Pentaceratops (x3)
#15 Protoceratops
#17 Dilophosaurus
#18 Supersaurus
#20 Oviraptor
#22 Protarchaeopteryx
#24 Carnotaurus
I love this set. Not much negative about dinosaurs. They've got some nice color on these and it's a plus that they are drawings. (If you thought about asking how I know that they are drawings, you might want to think again about what the subject of these cards is)
Lords of Olympus 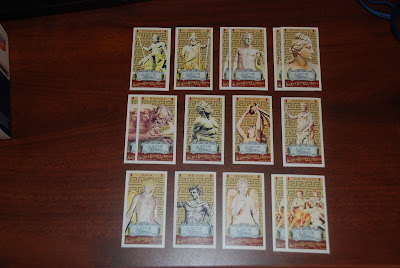 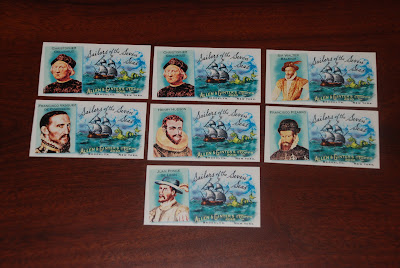 SSS:
#1 Christopher Columbus (x2)
#3 Sir Walter Raleigh
#5 Francisco Vasquez de Coronado
#8 Henry Hudson
#9 Francisco Pizarro
#10 Juan Ponce de Leon
This set is definitely my favorite of the insert sets! They are just all around awesome designs, and use some nice portrait drawings as well as one that reminds me of ancient maps (back when sea monsters sank ships and the world was flat).
If anyone can help me out, be it filling some of my needs for these sets or simply taking some doubles off my hands, let me know. I'm more than willing to make trades.
BTW, A&G minis and the Black Border in the first picture are open for trade, I haven't much need for them. I'd like to hopefully get some parallel minis of players I collect in exchange.
Posted by NMCLax24 at 10:04 PM