Finally I'm back with a new post. Finals last week were killer but I made out pretty well overall. And of course as soon as I got home pa dukes had a pile of yard work for me to do. But I have taken the time to become reacquainted with my "home collection" and now I'll be posting a bunch of stuff. First we have some mail to post.
The other day I received a package in the mail from Mike from JD's Wild Cardz. I was only expecting a Roy Halladay jersey card, but it ended up being a hugely generous package. Let's get right to it then. 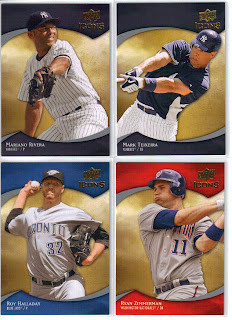 Four cards to add to PC's. I was actually surprised to find that I kinda like the UD Icons cards. It never before had struck me as something to delve into, but I'm certainly happy to have them for my PC's. 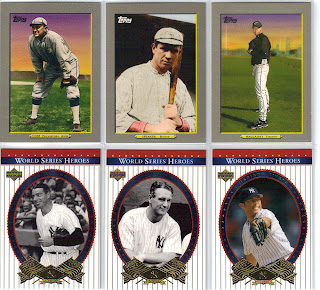 Three more cards to add to my 2009 Turkey Red collection. Slowly but surely I will collect them all. I really like the Wold Series Heroes cards below those. I have the 5 card set commemorating Roger Clemen's 300th win in this card design but never actually realized that there were more cards to the whole set. Always love to see DiMaggio, Gehrig and Mariano especially as world series heroes. Cool stuff 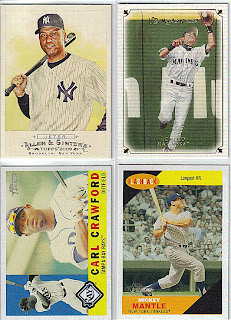 Then of course there were some cards from some of my favorite sets. The Ichiro will go toward building the 07 Masterpieces set, but the Jeter, Crawford, and Mantle will go to my player collections. I really like that Mantle insert, really nice looking card. 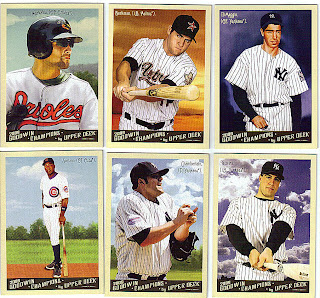 These were definitely exciting cause they are players I collect plus they will fill holes in my Goodwin collection. This way, if I ever throw up my hands and decide goodwin was too tedious to complete, I'll still have these beauties. I've bought 16 packs of goodwin and I down even have 45 base cards, and that includes the 6 from this package. That is an average of about 2.5 base cards per pack! Isn't that a lil ridiculous? Never mind the fact that I'll eventually start pulling crazy amounts of doubles. That's where you guys come in... 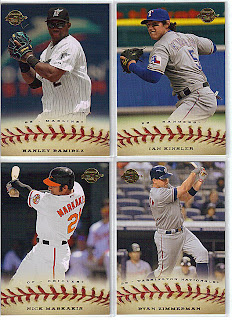 These cards are so nice looking! Way better than the Sweet Spot base cards of the past. All players that I love to collect.
And then of course, the finale.... 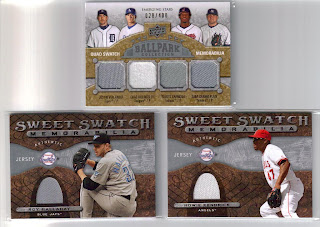 Woah, awesome. Quad swatch #d/400 of Verlander, Billingsley, Carmona, and Chamberlain! Not to mention the Halladay and the Kendrick swatches. Great stuff!
Mike, Thanks so much for the cards man. Some really great stuff. It might take me a little while to pay back the quad swatch, but I'll definitely get you something nice. If for some reason you haven't seen Mike's blog, JD's Wild Cardz, go check it out.
I should have some more posts later today, and then some more throughout the week. Stay tuned
Posted by NMCLax24 at 7:33 PM